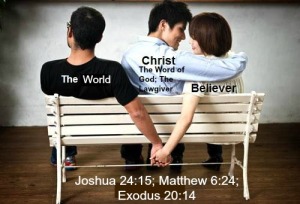 Adulteresses! Don’t you know that friendship with the world is hostility toward God? So whoever wants to be the world’s friend becomes God’s enemy.—James 4:4

I recently saw a picture that made me heart sick. It was the same picture as above only on the back of the black t-shirt were the words “The Law” and under the bench was the scripture address Romans 7:1-6. The implication of that picture is that the people who want to follow God’s Law are committing spiritual adultery. My first thought was, “Wow! How blasphemous!” How can the desire to walk as our Savior walked and follow the teachings, instructions, and commands of the Most High God be spiritual adultery? So, I did what I always do when something strikes me as off…I went to the Word (and I had a little fun with some photo editing).

First of all, Yeshua the Messiah is God’s Word from the beginning. (John 1:1) He is the Lawgiver. In Isaiah 33:22 it says, “The Lord is our Judge, the Lord is our lawgiver, the Lord is our King. He will save us. In James 4:12, it tells us, “There is one lawgiver and judge who is able to save and to destroy. He gave the Law to Moses on Mount Sinai. He taught and kept the law when He walked on the earth.

Throughout God’s Word, we see the consistent theme of natural and spiritual. Paul tells us in 1 Corinthians 15:45-47, “So it is written: The first man Adam became a living being; the last Adam (Yeshua) became a life-giving Spirit. However, the spiritual is not first, but the natural, then the spiritual. The first man was from the earth and made of dust; the second man is from heaven.” Before Yeshua, obedience was about being obedient to the letter of the law (natural). After Yeshua, it became about being obedient from the heart (spiritual). That is what the prophecy from Ezekiel 36: 26-27 is about, “I will give you a new heart and put a new spirit within you; I will remove your heart of stone and give you a heart of flesh. I will place My Spirit within you and cause you to follow My statutes and carefully observe My ordinances.” (emphasis mine) This is what the prophecy from Jeremiah 31:31-34 is about, “Look, the days are coming”—this is the Lord’s declaration—“when I will make a new covenant with the house of Israel and with the house of Judah. This one will not be like the covenant I made with their ancestors when I took them by the hand to bring them out of the land of Egypt—a covenant they broke even though I had married them”—the Lord’s declaration.“Instead, this is the covenant I will make with the house of Israel after those days”—the Lord’s declaration. “I will put My teaching within them and write it on their hearts. I will be their God, and they will be My people.No longer will one teach his neighbor or his brother, saying, ‘Know the Lord,’ for they will all know Me, from the least to the greatest of them”—this is the Lord’s declaration. “For I will forgive their wrongdoing and never again remember their sin.” (emphasis mine). Romans 7:6 says, “But now we have been released from the law, since we have died to what held us, so that we may serve in the new way of the Spirit and not in the old letter of the law.” If we are true believers, we have His Spirit to write His law on our hearts…we have the privilege of obeying from the heart, not from the letter.

Yeshua’s teachings magnified the law. Isaiah 42:21 says, “The Lord was pleased, because of His righteousness, to magnify His instruction and make it glorious.” Yeshua revealed the full meaning of the Laws of God…that is why he rebuked the Pharisees…they kept the letter of the Law, but their hearts were not right. Reread the Sermon on the Mount in Matthew 5. Now, it’s not only about actually physically murdering someone, now if you hate someone, you have committed murder in your heart. Now it’s not only about committing the physical act of adultery, if you lust, you’ve committed adultery in your heart. By bringing fuller meaning to God’s Law, Yeshua did not nullify the need to obey the letter of the law. That would be ridiculous. It’s okay to actually murder someone as long as you don’t hate in your heart? But now, it has become a heart issue…because where do these physical acts begin?

The apostle John had a lot to say about true faith.

“This is how we are sure that we have come to know Him: by keeping His commands. The one who says, “I have come to know Him,” yet doesn’t keep His commands, is a liar, and the truth is not in him. But whoever keeps His word, truly in him the love of God is perfected. This is how we know we are in Him: The one who says he remains in Him should walk just as He walked.”—1 John 2:3-6

“Dear friends, if our conscience doesn’t condemn us, we have confidence before God and can receive whatever we ask from Him because we keep His commands and do what is pleasing in His sight. Now this is His command: that we believe in the name of His Son Jesus Christ, and love one another as He commanded us. The one who keeps His commands remains in Him, and He in him. And the way we know that He remains in us is from the Spirit He has given us.”—1 John 3:21-24

Are you following your own deceitful heart (Jeremiah 17:9) and the traditions of men (Mark 7:8)? Do you believe the lie that Yeshua nailed God’s Law to the cross? Do you really believe it is possible to commit spiritual adultery by obeying God? I would be more concerned with those that have one foot in the world and one foot with God…that my friends is spiritual adultery (James 4:4). Repent and turn from the lies. “But if it doesn’t please you to worship Yahweh, choose for yourselves today the one you will worship.”—Joshua 24:15